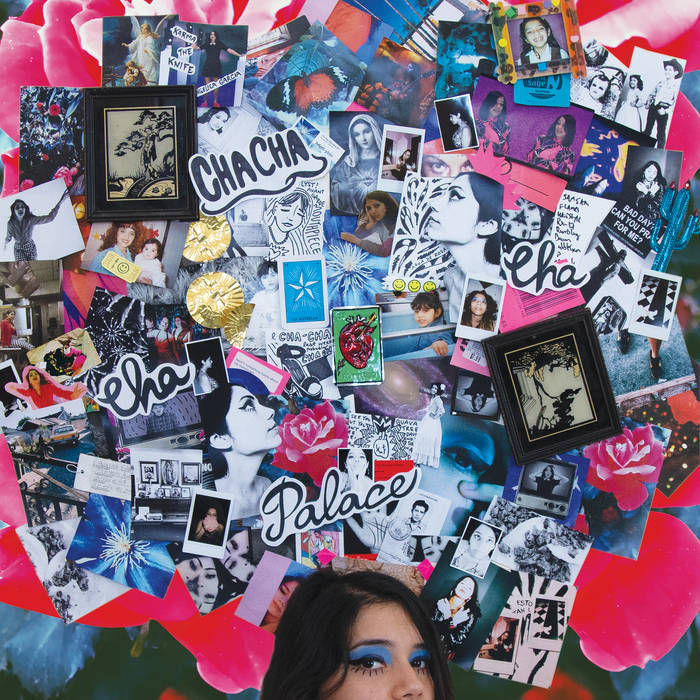 Ben Johnson "Cha Cha Palace" is a refreshing and super unique collection of songs. Angelica effortlessly weaves a range of genres into a vibrant and compelling body of work, very excited to see what this artist has in store for the future! Favorite track: Lucifer Waiting.

Sandra Trevino ¡Asi me gusta, con gusto! Cha Cha Palace is a must-have for any music lover's collection. Sass and style abound along with a strong sense of cultura in electro-pop driven music. The vox are realreal and I dig the way Angelica bounces them off so many cool textures. It's badass. Escuchalo right now.

Danny When I first heard Guadalupe, suggested to me by a music post I follow, it blew my mind. Just the kind of sound I had been looking for. On a whim I pre-ordered the vinyl, and it did not disappoint. The rest of the album is as good, and in some cases like valentina in the moonlight, better than the 4 tracks first released. Excellent stuff here, and I look forward to Angelica Garcia's blow up! Favorite track: Valentina in the Moonlight.

Two years in the making, 25-year-old Angelica Garcia’s album Cha Cha Palace is the result of an artist’s need to SAY SOMETHING. The second song on the record, “Jícama” might only be a minute and 25 seconds in its entirety, but the message spans generations and is one that resonates deeply for Garcia with her Mexican and Salvadoran roots. Singing/shouting, “I see you, but you don’t see me Jímaca, Jímaca, Guava Tree…I’ve been trying to tell ya, but you just don’t see, like you I was born in this country,” Garcia tells the reality for millions of Americans unapologetically and with passion.

She recalls the first time she performed the song live in Los Angeles, “Sometimes your audience appears unexpectedly,” she states simply. “I was playing Bardot in Hollywood as part of KCRW’s School Night! series when I debuted ‘Jícama’ and I remember looking out into the crowd – and in front of me were all these young Latinx kids, singing back, every word, even though it was a song I had never played live, or released – and I had a moment of, ‘this is exactly who I wrote this song for, anyone who feels like they are in-between two identities and their heart is in two places.'”

That feeling of being between places is something Garcia knows well having been raised between multigenerational, multicultural, homes with step-parents and half-siblings. Additionally, she made the journey from the West Coast to the East Coast and back again multiple times before finally settling down in Richmond, Virginia.

She fondly recalls Mexican ranchera music always playing throughout her childhood. Ranchera was ingrained within the maternal side of her family with her Mother, Grandmother, Uncle & Aunt constantly singing the traditional music throughout the home of her Grandparents. Garcia’s family was supportive of her musical talents and interests, enrolling her in a magnet school for the arts, Los Angeles County High School for the Arts, where she would take her first formal classes studying jazz and classical music.

But it was Garcia’s mom who was her toughest critic, making her rehearse a song over and over and challenging Angelica to make her feel something. “I would question why, what had I done wrong as I was rehearsing or practicing with my Mom and she would simply answer, ‘I didn’t believe you.'” This was a big motivating factor for Garcia, who admitted that even though she attended the school at the same time as the Haim sisters and Phoebe Bridgers, that some of her old classmates “probably wouldn’t remember me, I was extremely introverted and didn’t stand out much…unless I was singing.”

After graduating from high school in 2011, Garcia followed her step-dad (a recent seminary graduate) and her mom (a singer of mostly mariachi music and latin pop music) across the country to her current home state of Virginia. “I was too young to feel comfortable with just staying in LA,” Virginia was completely different from Los Angeles but ultimately, the right move for Garcia’s songwriting and career. “It’s a strange juxtaposition about who I am in the sense that the person in me feels really comfortable in East Los Angeles and in the San Gabriel Valley, but then in Virginia, a lot of what I’ve been able to do and how I’ve been able to make this album is because I’m living in Richmond and around so many amazing musicians before the city has turned into this big thing.” Garcia feels that her peers and friends’ contribution to the record over time has made Cha Cha Palace a unique and organic body of work.

With her beginnings firmly rooted in Los Angeles and her current home fostering her creativity, this dichotomous sense of self has been integral to shaping the vision for her new album and sophomore release, the follow-up to Medicine for Birds. Garcia has spent the last few years creating a new, second family for herself within the welcoming community of Richmond, VA. But East LA fingerprints are woven all throughout Cha Cha Palace, from tracks like “Jícama,” to guest vocals from both her mother (on “Llorona”) and grandmother (on a José Alfredo Jiménez song, “La Enorme Distancia”), the past is always present within her memories, her songs and her art.

Still–moving across the country and far away from her family takes its toll. Garcia says she constantly feels the distance and you can feel the loneliness that haunts her embedded in each song on her Cha Cha Palace through the dancing beats and lush vocals.

“This record, the more that I looked at it, was me taking memories of my childhood in LA and trying to combine all these little bits and pieces and turn them into this giant memory of this place that kinda exists, but is also not completely there. So this record feels like a mental scrapbook.” All over Cha Cha Palace, you can feel the love for Los Angeles in the rhythms and lyrics, “I was trying to define home through this record.”

For many of us, it’s the delicate dance of loving someone, or something from a place of not being able to be with them, or be in that exact space–this is Garcia’s true superpower. Armed with the skeleton of a collage on her wall that became the artwork for Cha Cha Palace, all she needed were a few sparring partners. Enter, Eddie Prendergast and Russell Lacy. Garcia met Eddie Prendergast first in a show one night while he was playing with his band the Mikrowaves. “I was missing LA, missing knowing more than 5 people with the last name Garcia, whereas in Virginia I’m the only Latina in the room sometimes – when I found Eddie.” Immediately feeling the connection to his appreciation for Latin rhythms and beats that he fluidly married with the cool sound of rock, they quickly started working on “Karma the Knife,” the second track on Cha Cha Palace. From there, everything fell into place, with Eddie joining the team along with the engineer of Garcia’s favorite Richmond studio, Russell Lacy. It was through Lacy and Prendergast that Garcia credits her meeting everyone she worked with to make Cha Cha Palace, including Spacebomb Records, who will release the record on February 28, 2020.

“We can’t just succumb to the darkness, we need to talk about everything that’s happening now. While I was making this record, I kept thinking over and over, when you go to turn on music, ‘what is it you want to hear?’”

One of the tracks on the album titled, “Guadalupe,” focuses on the massive icon within the Latino community. Garcia describes Guadalupe as a badass 14-year-old who is the epicenter of a culture, and the power and responsibility that comes along with that. “I love that she is this powerful being, even in her delicateness. The line that really resonated with me is, your power isn’t defined by your physique. I thought about what I wanted my little sisters to hear. I really challenged myself with all of my songs, to write about things that I wanted other people to hear, especially if my siblings are singing along. It’s really weird out there,” she says laughing… “I wanted to be the voice that I wanted to hear.”

Like Mitski, Lorde, Billie Eilish, and Rosalía, Garcia isn’t afraid to tear pages out of her diary and express emotions that might be difficult and oftentimes daunting to share given today’s social and political environment. Like her peers, she joins a new chapter of musicians who are connecting with their audiences on a level that lives outside the reaches of technology, trends, and social media, the daily experience of feeling torn between saying something and doing something, for being a voice and speaking with your voice, of being Latina while being American. And it’s humanity and honesty that audiences are looking for and will find in spades throughout each note of Cha Cha Palace.

A singing, writing tangerine based in Richmond, VA

Bandcamp Daily  your guide to the world of Bandcamp